My Days of Dark Green Euphoria

A novel by A.E. Copenhaver 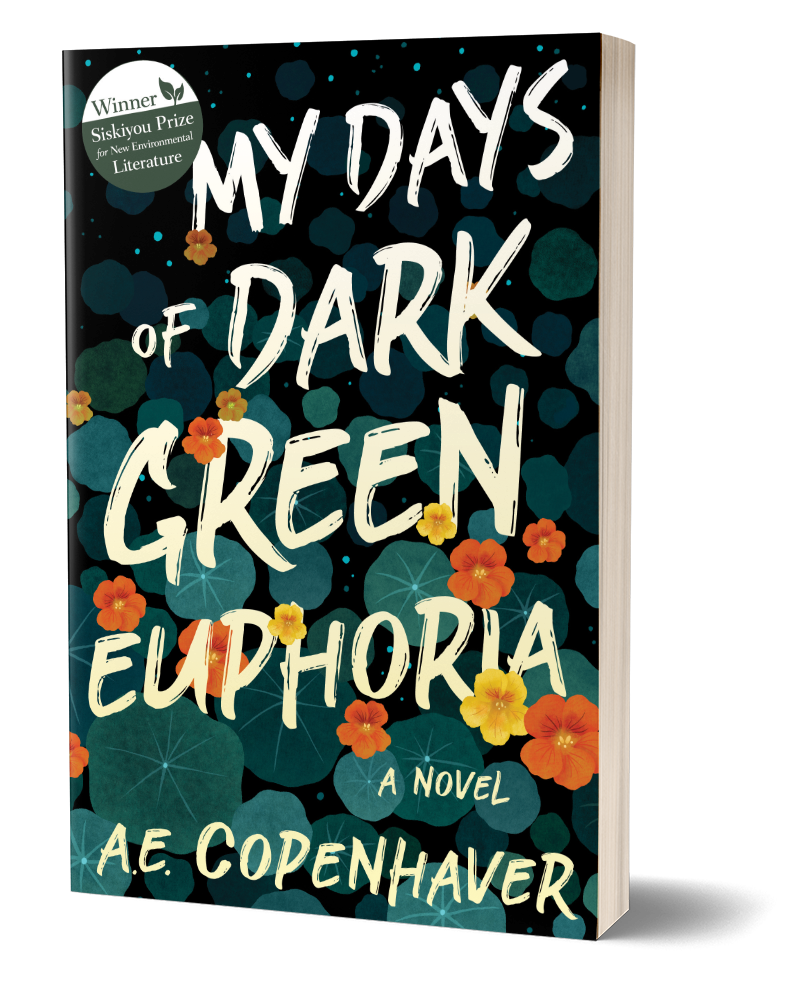 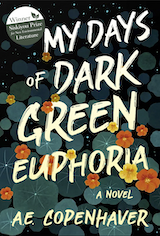 
“A.E. Copenhaver has achieved something very special with My Days of Dark Green Euphoria. From the very start, this novel is captivating and takes you places you don't see coming. The 30-something female hero is unlike anyone else you've met in fiction, and the darkly hilarious story is ultimately enlightening. It's a book that will stay with you long after you've finished reading it.”

“The introductory paragraph is so dark, so devastating and also so determined that it grabs the reader by the throat, forcing us to pay attention and read on … the author’s excruciating detail has primed us to believe it absolutely matters, and now we have to take a moment to recover. And then read on.”

“The anxieties of finding an impossible balance that most of us feel ring deeply and physically from the outset of this novel … Cara works to come to terms with being alive in an increasingly broken world. With language that both makes the reader laugh out loud and awakens a cutting empathy, the novel follows her embodied journey splendidly.”

“Awareness of ecocide, environmental devastation, and animal suffering might not seem the likely content for a madcap adventure. That was before My Days of Dark Green Euphoria.”

“It is a difficult task for a writer to balance all our eco-anxiety with grace and humor, but Copenhaver manages it with no small literary flourish.”

“From the very start, this novel is captivating and takes you places you don't see coming ... It's a book that will stay with you long after you've finished reading it.”

Thirtysomething Cara Foster is, one might say, eco-anxious—perhaps even eco-neurotic. She eats out of dumpsters (not because she wants to but because it’s the right thing to do), does laundry as seldom as possible, takes navy showers every couple of days, and is reevaluating her boyfriend for killing a spider instead of saving a life.

Cara has never met her six (soon to be seven) nephews and nieces because she doesn’t fly domestic (unless it’s an emergency) or international (ever). She longs for a carbon footprint so light you’d hardly know she exists.

Then, during a mimosa-soaked Sunday brunch, she meets her boyfriend’s alluring mother, Millie, and Cara finds herself mesmerized. Millie represents everything Cara’s against: She eats meat, has cowhide rugs, drives a car the size of a small yacht, and blithely travels the world by boat, plane, and train—without any guilt whatsoever. In fact, Cara soon admits this may be why she finds herself so drawn to Millie. As they begin spending time together, getting pedicures and drinking sixteen-olive martinis, Cara becomes hooked on Millie and this new freedom from the harsh realities of life in the twenty-first century.

Yet before long, Cara risks losing everything to be close to the mundane extravagance of Millie’s world—her career, her best friend, and her identity all hang in the balance as she struggles to disentangle from this intoxicating muse.

Irreverent, witty, and provocative, My Days of Dark Green Euphoria—winner of the Siskiyou Prize for New Environmental Literature—is a satirical novel of how a life on the edge of eco-anxiety can spiral wildly out of control, as well as how promising and inspiring a commitment to saving our planet can be.

“Awareness of ecocide, environmental devastation, and animal suffering might not seem the likely content for a madcap adventure. That was before My Days of Dark Green Euphoria. After the novel’s end, the hero lingers in my consciousness, a provocative and delightful presence wiggling her finger at me: ‘See, this is what it feels like.’”

“My Days of Dark Green Euphoria encapsulates better than any other novel I’ve read the struggles faced by people living on Earth at this very moment in history. While few of us go to such extremes as the protagonist Cara Foster, anyone who cares about the planet will no doubt see themselves reflected in her. Vegans especially will relate to her thought processes, her judgments of the world around her, and her struggles to cope with all the suffering she sees."

“Take Esther Greenwood out of 1950s New York and drop her in 21st-century San Francisco, and A.E. Copenhaver has given us a Bell Jar for the eco-neurotic age. My Days of Dark Green Euphoria captures in equal measure both our rage and helplessness in the shadow of climate disaster and the banality of much modern environmental advice to tackle the crisis. In Cara Foster we have a new sort of heroine, a vegan- (and plastic-, and climate-) killjoy, steely-eyed, and yet compassionate toward the contradictions we face in living an ethical life, and also very funny! As a treatise on millennial existence, in bearing witness to the unravelling of our planet, corporate greed, the suffering of animals and nature, set against an alluring consumerism that traps us in decreasing circles of pleasure and shame, Copenhaver has written an honest, witty, and refreshing cry into the night. I enjoyed hearing a voice that sounded like my own thoughts — many times I thought, ‘I’ve done this!’ — and I know dozens if not hundreds of friends who will want to read this book. It is a difficult task for a writer to balance all our eco-anxiety with grace and humor, but Copenhaver manages it with no small literary flourish. Mind you, be prepared: You’ll never look at rose gardens, straws or sushi in the same way again.”

“The novel has a deliciously subversive premise … The writing is good; sharp and knowing and at times beautiful. Cara is an engaging protagonist, funny and self-aware … We leave Cara with her hands plunged into the earth, finally part of the great mass of imperfect and contradictory humans who surround her. It is a lesson which, in these unreal times, we must hope it is not too late for us all to learn.”